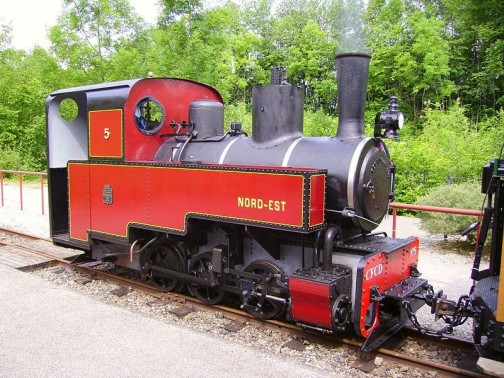 The Decauville company developed portable railways for use in agricultural settings, mining and construction projects. The track was a major innovation and used sections of narrow gauge portable track that was fixed to metal sleepers. From the late 19th century, Decauville produced not only the track but also locomotives and cars.

This “Decauville 8T” is an 0-6-0T locomotive that was specifically produced for the French army trench railways during WWI to their ‘standard gauge‘ of 600mm ((1 ft 11 5/8 in). Decauville produced 320 of these locomotives, with both well and side tanks between 1914 and 1918. Decauville could not keep up with the military's demand, so Kerr Stuart of the UK built a further 70 units. The KS locomotives were known as the "Joffre" class. A further, somewhat different class, the "Haig" class was produced by Kerr's from what were ostensibly excess parts.

As a historical point the original four locos built by Kerr Stuart had to be modified on shipping to France. The tyre profile was altered, as was the springing, for those four, and for all the later production. Subsequently an additional “ballast” weight was added behind the front buffing plate.

A number of these locomotives still exist; Axe on the rebuilt L&B is a modified Joffre, thus proving that despite being built for a short term life, they were rugged and reliable.

This Steam And Things etched brass fret is for a War Department Decauville 8T 0-6-0T. This is not a kit, but a set of etched parts as an aid to scratch building. Other parts may be added in the future.

These parts could be used to scratch build a Kerr Stuart "Joffre" class as well, as the differences were cosmetic and were related to the well tank, and as noted above, the springing, tyre profile, and a few other incidentals. 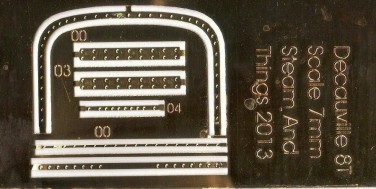